Welcome to the main portal of the Southall-History historic archive, from which page you will be able to explore images of old Southall as it was in times past and also, hopefully, become acquainted with some less commonly known facts about our town.

Visitors to the Southall-History website generally fall into two broad categories; relatively recent or younger Southall residents – and older, long-time or former residents. It is hoped that the former will enjoy discovering a previously unsuspected dimension of the town’s past; and that the latter will have the pleasure of re-discovering vistas and memories of Southall in former, perhaps more idyllic times.

It is particularly to these ‘older’ current and former Southall residents, to whose kindness I appeal for the use of any of their old images or their recollections of any aspect of Southall’s past in order to preserve and perpetuate them within this dedicated historic resource. The use of any such images, however seemingly obscure, would without question be of immeasurable value to this Southall-History website, as although much research is pending publication, this can only be done most effectively with accompanying images: so whether you have odd snaps of the “Victory” on King Street, the “White Lion” on White Street, street vistas from all decades up to the 80’s, or just want specific memories preserved, all would be gratefully accepted, with full acknowledgements published.

With the coming of the Great Western Railway to Southall in 1838 the then ‘village’ was dramatically split in two. At that time Southall Station and Railway Bridge did not exist (these were not be built until some twenty years later); only a single level crossing provided the town’s population with any rejoinder.

Since that time to the present day, Southall town has commonly been categorised by residents in relation to its areas’ location either North or South of the railway line: In early Edwardian times these were termed “over the Trams” – referring to the area from the railway bridge northward toward The Broadway, or conversely, “over the Green” – referring to the area from the railway bridge southward toward the Manor House and beyond. Later, these classifications were more commonly termed; “New Southall” and “Old Southall” respectively. 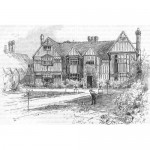 Archives for Old Southall – “Over the Green” 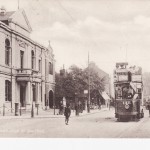 Archives for New Southall – “Over the Trams”